BLUEMIND: Your Brain On Ocean

-Wallace J. Nichols, PhD
"We are more than logical. We are human." - Jacques Yves Cousteau

On June 2nd, BLUEMIND Summit: www.mindandocean.org at California Academy of Sciences (join our livecast), followed by an Ocean NightLife event...always a favorite.

(Note: This is a guest post from Jesse Senko of the Blue Ocean Institute.  It originally appeared on the BOI Blog here.)

On the Pacific coast of Mexico, all five species of sea turtles (green, hawksbill, loggerhead, olive ridley and leatherback) have declined over the past century due to illegal poaching and incidental capture in fishing nets. One of the most heavily impacted areas has been the Bahia Magdalena region, where endangered sea turtle populations remain low despite progressive conservation measures that include complete legal protection for sea turtles and their major nesting beaches.
In order to evaluate alternative sea turtle conservation strategies that rely on increased participation of local residents, a team of researchers led by (SEE Turtles co-founder) Dr. Wallace J. Nichols and myself interviewed 136 people from seven coastal fishing communities in the Bahia Magdalena region.  “If we want to save sea turtles we need to find novel ways to include local residents in conservation efforts, and basically that comes down to finding out how a live sea turtle can become worth more than a dead one, be that financially, emotionally, or intrinsically…but most likely some type of combination”, said Senko, the study’s lead author.  “The human-sea turtle relationship is wonderfully complex. No surprise, so are the ways to restore sea turtles. Restoring what’s broken in nature requires biodiversity, economic and cultural diversity, but also emotional diversity”, noted Nichols, a marine biologist who also founded the grassroots sea turtle conservation organization Grupo Tortuguero.
The researchers found that although residents were overwhelmingly interested in participating in sea turtle conservation, peer pressure and conflict within their community often presented challenges. “It can be difficult to fully embrace sea turtle conservation when some of your friends, family, and community members may still be eating, hunting, or even selling these animals on black market circuits, especially if you are not directly benefiting from the conservation efforts in some capacity”, added Senko.

The development of sea turtle ecotourism may help protect sea turtles and provide additional revenue for fishers who previously hunted them or accidentally captured them in their fishing nets.  When asked about the prospects of sea turtle ecotourism, most residents indicated that this would have a positive impact on their community. Economic incentives and increased protection for sea turtles were mentioned as benefits of sea turtle ecotourism, whereas peer pressure, difficulty obtaining permits and producing effective marketing materials, and doubts about direct economic benefits were cited as constraints. Whale watching guides were especially interested in developing sea turtle ecotourism programs, in large part because they already possess the necessary equipment (e.g. boats, GPS devices) and knowledge of sea turtle life history, movements, and abundance.  “Researchers have relied on turtle hunters, fishers, and local whale watching guides to find and study sea turtles since I first arrived in Baja as a doctoral student in the early 1990s. Sea turtle research and conservation in Baja has been all about artful collaboration and mutual benefits from day one”, said Nichols.
Recently, Nichols and Brad Nahill started a non-profit sea turtle conservation travel program called SEE Turtles that relied upon some of the findings and recommendations from this study. SEE Turtles works to provide ways for visitors to work hands-on in the field with fishers and marine conservation biologists to capture sea turtles and collect/record scientific data on these endangered animals. Although the researchers acknowledge that initially sea turtle conservation jobs are likely to be supplemental, the added income from SEE Turtles has already aided local communities and sea turtle protection efforts.

“Conservation travel endeavors that generate even a modest amount of part time jobs is a great first step in developing and promoting positive attitudes towards sea turtle and marine conservation efforts”, said Senko. “If people know of others who work with sea turtle conservation efforts they may develop pro-environmental attitudes towards sea turtle conservation even if they themselves do not directly benefit from the endeavor…and we’ve already seen this from gray whales in Baja, so why not sea turtles, they are here year-round.”
“We believe that adding sea turtle activities to an existing tourism experience that includes whales, dolphins, sea lions, birding, island and dune exploration, kayaking mangroves, diving/snorkeling, sport fishing, and surfing would be a great starting point, especially because direct economic benefits from existing sea turtle ecotourism programs are likely going to be minimally distributed throughout the communities”, added Senko.
In fact, SEEturtles.org has been so successful that Nichols and Nahill have expanded the program to include other vulnerable wildlife species (i.e. bears, large cats, birds, sharks, and whales) and the project is now called SEEtheWILD.  “Everyone I meet enjoys seeing beautiful animals in the wild: scientists, kids, fishers, and travelers alike. Even people who like to eat sea turtles, love seeing them swim underwater. As our understanding of our emotional connections with each other and nature deepen, it will certainly help guide and expand conservation and restoration efforts”, noted Nichols.
The other authors in the study include current School for Field Studies/Center for Coastal Studies professor Andrew J. Schneller, Francisco “Paco” Ollervides, former Center for Coastal Studies director and current Waterkeeper Alliance research associate, and Julio Solis, Bahia Magdalena Baykeeper, Latin America Regional Representative for the Waterkeeper Alliance, and distinguished Grupo Tortuguero sea turtle biologist. The full study is published in the journal “Ocean and Coastal Management” (Email the author below for a copy).
Blog written by Jesse Senko, Blue Ocean Institute’s seafood consultant: jesse.senko@gmail.com

The next stop on my "Tour of Nicaraguan Turtle Beaches" with FFI's Jose Urteaga is Refugio de Vida Silvestre Rio Escalante Chacocente, Chacocente for short. Chacocente is one of only two beaches on Nicaragua's Pacific coast where the Olive ridley sea turtle nests "in mass". This phenomenon, also known as an "arribada" which means "the arrival", only occurs on a small number of beaches in the Eastern Pacific and Indian Oceans - a handful occurring in Mexico, Nicaragua, Costa Rica, and Panama, and a few in India. Elsewhere in the world, the Olive Ridley is a solitary nester like other sea turtle species. 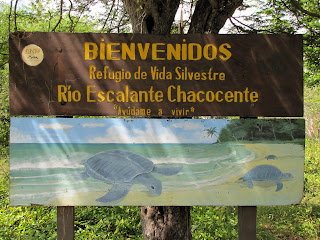 Much to my dismay an arribada occurred just a few days before my arrival here, with approximately 10,000 Olive ridley nests being deposited over the course of just a few days on this very beach that I am walking on. In my time working with sea turtles I have yet to witness an Olive ridley arribada but imagine it would leave me without words.  Today, only a few scattered tracks remain on the beach.
The Olive ridley is the only turtle to put on such a spectacular nesting display which occurs approximately every 28 days during the nesting season. During these few days, tens of thousands of turtles may converge on a single stretch of beach, competing for prime beachfront realty, and inadvertently digging up each others nests in the process of laying their own. This "mass nesting" strategy is thought to overwhelm predators, ensuring the survival of some of the young, although the arribada strategy is still somewhat a mystery to scientists. 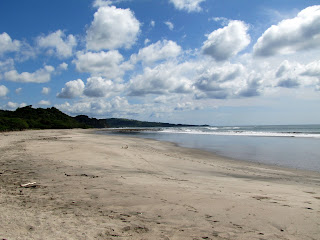 The beach here at Chacocente is really spectacular....and really hot today. I'm walking this scenic stretch of beach with a University student from Managua that is here to do her thesis research.  She's looking at the hatch success rate of nests in relation to the density of nests on the beach. Olive ridley arribada beaches, with their high density of nests, naturally have lower hatching success rates than other beaches where turtles are solitary nesters and nests are spaced out along the beach.  As we collect sand temperatures from the study sites, armed military guards are walking down the beach on patrol.

The beaches here are part of a wildlife reserve, managed by MARENA - the Nicaraguan Ministry of Environment and Natural Resources, and are patrolled by the Nicaraguan military. Jose and Fauna & Flora International work in collaboration with these entities to manage the sea turtle program here, protecting the turtle eggs from poachers.  Although the Olive ridley is the most abundant of sea turtles worldwide, their numbers have been in decline due to poaching and other threats like entanglement in fishing gear.

This part of Nicaragua also holds one of the largest tracts of dry forest in the country.  FFI is also working with the government and local communities here to manage and preserve this important habitat and develop alternative livelihoods for locals including reforestation projects and providing services to visitors.


The 10,000 Olive ridley nests that were deposited here just prior to my visit are due to hatch in January.  Although I missed the last arribada by just a few days, perhaps my next visit will coincide with the hatching and mass exodus of thousands of tiny little hatchlings making their way to the sea.  I can hope at least, that the timing of my arrival will be better next time around.
For more information about Fauna & Flora International's work in Nicaragua click here.
For information on how to contribute your time to a sea turtle conservation project, see our Volunteer page.
Paula von Weller
Research Associate
SEE Turtles
No comments: